Has Time Run Out for the U.S. Presidential Election Process?

So we have nearly 55 days until we know the results of the next US Presidential Election and that does seem like a good amount of time. It seems even longer if you are really following and participating in the reality (or absurdity) and aggressiveness of this particular election. But the real truth is, on some level, we are out of time. And this ‘out of time’ clock started ticking on September 9th.

We need this important time, these nearly two months to learn more about the candidates, hopefully see the details of Trump’s tax returns, live through as many debates as our blood pressure will allow and to really better understand the plans put forth, or not, from each candidate. And there will be additional DNC leaks and more news on family Trusts and Foundations as well as new investigations and the outcome of some potential lawsuits. These fact SHOULD really influence who we vote for and be part of the selection process for the best and most qualified candidate.

As everything about our elections in the U.S. is complicated and unique per state, the truth is that EARLY VOTING IN THE U.S. IS UNDERWAY! What, people can vote now and they don’t even know all the facts and details about their candidate? OK, we know that this is a two-horse race and our country is greatly divided but I am hoping (and praying at times) that the verdict is still out for many and that they will take a wait and see attitude and come out and vote for the better (not best as we never seem to have a best) candidate!

Here are some details on the Early Voting process in the U.S. and I’m going to start with the big number first.

In data compiled by The Associated Press, ‘Voters who cast ballots in advance are expected to make up between 50 to 75 percent or more of all ballots in the battlegrounds of North Carolina, Colorado, Florida, Nevada, Arizona and Georgia.’ And this scares the sh*t out of me as this accounts for a lot of people not waiting for as much information as possible to make the best voting decision.

But this would assume voters in the U.S. are open to all the facts, are open-minded on all the issues (vs. only one, think Pro-Life), truly understand how much their vote counts (think Brexit) and are concerned about the long-term impact of a very bad decision.

The candidates certainly have a strategy that takes into account early voting and are campaigning in many of the above-mentioned states to encourage people to get out and vote. This is to be expected at this stage of the election process.

So I will end here with a little story about why politics is so important to me and always has been in my life. I am the daughter of an elected politician, my late-mother who won every election she ran for on the local city level (Go MOM!). And my father, who also had political aspirations when I was young.

As a very young girl, I was posing for family political photos that would eventually appear on a notepad and in a brochure, I went door-to-door with teams and passed out more bumper stickers than I can count, I ate countless pieces of pizza at the ‘Sick” election party office, I lived thought the highs and lows of the election process and opposing candidates who did underhanded things to get votes and so much more. My parents are both life-long registered Republicans and they raised five kids who all vote according to their beliefs with little influence from our parents. But we all care about what happens in our city/county/state/country and take voting seriously. 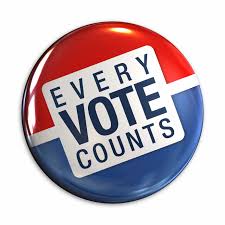 My hope is that you care about this country as well, regardless of how you grew up, where you go to church, how your parents are registered or how long you have been voting. Voter turnout is SAD in the U.S. and in 2016, we don’t just need every vote, we need educated and smart votes and EVERY VOTE COUNTS.#democracy

Mark your calendars for the debates!

This site uses Akismet to reduce spam. Learn how your comment data is processed.

FASCINATED BY THE WORLD

A site to discuss better education for all

Beaver County Blue: Voice of the 17th CD of Progressive Democrats of America
Why Evolution Is True

Why Evolution is True is a blog written by Jerry Coyne, centered on evolution and biology but also dealing with diverse topics like politics, culture, and cats.

Curated by John Gannon and Team

The World of Business

Helping you get started using social media for learning, teaching and research

Informing You Faster And Smarter, Everyday.